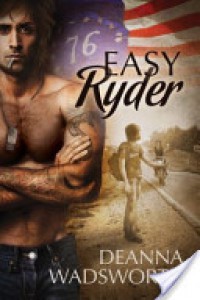 Easy Ryder is a book that could have been great if it hadn't been for two big, glaring defects. It is the perfect example of the fact that just because an author has a good story to tell, that doesn't mean they know how to tell it well. I loved the setting of this story in 1976, post sexual revolution, but pre-AIDS. When bell bottoms and muttonchops were high fashion. Where the celebration of the Bicentennial is juxtaposed by the poor reintegration of Vietnam veterans into society. Where an inadvertently outed gay boy of 18 is forced to leave home in rural Pennsylvania and hitchhikes across the country, headed to San Francisco because maybe someone like Harvey Milk has made a difference there. Boy hitches a ride from a Vet on a motorcycle somewhere in the Midwest... See? This could have been, should have been solid story gold.

And the story is there. An excellent novella buried under endless repetition that bloats it into a novel. If the author had stuck with just the events+sex, this would have been only half as long and half of that would have been sex. Of course, I understand we need to see Ryder's personal growth, but I hate it when an author doesn't trust me, the reader, to remember what I have been told before and then repeats things over and over, just to make sure that I get it. Not only do we get 4 or 5 repetitions of the events that caused Ryder to pack his bags and leave for California, we then get to hear him tell the story to Snake in great detail yet again. Meaning we could have cut at least 4 renditions of that story out of the book and not missed a single thing.

And not only do we visit the same events over and over, Ryder just has to reflect on every single interaction he has with any human being. Snake, of course, but also random gas station attendants and diner waitresses. Over and over he thinks the same things: How there has to be a place where gays can live openly, how he wants someone to love and not just to fuck, how Snake makes him feel safe, how Snake makes him feel good about himself, how he can't expect Snake not to be fucked up, how mom would think he deserved all this because of his sinful ways, how much it is going to hurt to say good-bye to Snake tomorrow, etc. etc.... It really drove me nuts. Every paragraph of action was followed by at least two paragraphs of repetitive introspection that explained exactly how we were supposed to have interpreted the previous events. Which boiled down to: pretty much the same way we were supposed to interpret the sequence of events that came before that.

The end of the book is more of the same reflective stream of consciousness. It feels deceptively like an HEA, but it is really nothing more than an HFN. What we get at the tail end is a few pages of Ryder daydreaming about everything that 'would happen' in their future. Snake 'would heal' from the horrors that tormented him and 'would forget' the betrayals etc. Together they 'would enter' the next chapter of their journey, they 'would work through things' as a team, and so forth. Personally, I can see plenty going wrong in this relationship. They've only known each other for two days and have spent more time fucking than talking. Half the time they do talk they argue. Snake has already proven he can be a real asshole when he's cornered. Ryder is going to demand monogamy and I am not sure Snake is even familiar with that concept. I can easily see Snake totally hating the Castro,  and then there's the PTSD and I can think of a dozen more things that spell future disaster.

As annoying as all the reminiscing is, things were made worse by the cheesiness of the language used. Yes, the 70s were a supremely cheesy era, I remember the latter half of it fairly well. From my dad's muttonchops and fringy carpet-style vests, from half the girls in my class wearing purple jumpsuits and Charlie's Angels on the black and white tv. But did the author really have to write this in what I think of as 70s Harlequin style?

“There, we could revel in our need for the passions society scorned us for.”

“...and claimed my mouth in a passionate kiss.”

“A tangle of limbs, grappling, and rolling in the grass like puppy lovers, we frolicked without a care in the world, the violence and hate we'd left behind non-existent in this sleepy little garden spot.”

“Snake's face and his body were an arousing vision to my eyes, his scent a delicacy for my nose, and his skin an absolute delight against mine.”

“Never in all my days had I experienced such a divine ecstasy.”

“How could it, when I got to reap the benefits of such a large endowment?”

“...holding on as euphoria took over, all my concerns and questions about the future with Snake fleeing with each kiss he bestowed upon my flesh.”