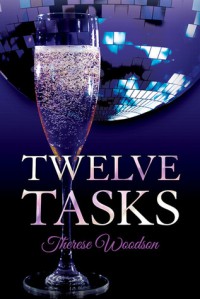 This was a light, mostly enjoyable read that was low on angst and high on cuteness. Matt and Eliot were both likeable, but not perfect. Their group of friends was funny and endearing. Eliot's tasks were fun, though not always a big success, but that's better than the other way around. The UST built up nice and while there wasn't a whole lot of sex, their first kiss was very satisfying. I liked the set up of the story with the new years resolution and Eliot's slow realization that it was safe to try and break out of his holding pattern.

While I enjoyed reading this, it did lack several things that could have made it better for me. First of all, the emotional impact of the things that happened in Eliot's past were diluted a lot by the telling-not-showing approach. That just makes it that much harder to make me feel his distress and no, I am not inclined to self-insert my own emotions into a book unless I am forced to. Telling me a character is crying doesn't make me cry. This is why Amy Lane and I don't jell either. As the story is written now, I find it hard to find sympathy for Eliot's mid-book week long breakdown, because I am obviously not feeling it. This happens all through the book often on a smaller scale too, where we get told the character is feeling something or figuring out something that I have seen only very flimsy evidence of. As I said this was light and cute, but I get the feeling it was supposed to have more of an emotional impact besides that. Call me jaded, but it was pretty much angst-free for me.

The writing style as a whole feels a little choppy. I've read much worse, but I have also read better. It was good enough to keep me entertained and not rue the day I selected this for a review, but it's not going to be a book I will still be thinking about next year.

The other thing that bugged me was that this was obviously Merlin fanfiction in a previous life. Personally, I don't have an issue with that in this particular case. It was clearly very much AU (Alternate Universe), because there was no magic, no middle ages, no dragons, no monsters to fight and all that. It wasn't like Catalyst where the setting is the virtually the same as in Stargate: Atlantis and Jason Finely is so blatantly Rodney McKay it really can't be called an original story in any way, shape or form. No, my problem is that I happen to really like Merlin fanfics and I have read a couple of hundred of them or so. Everything just slotted into overly familiar places for me in this one. Seeing the whole Scooby gang with different names and different physical attributes felt weird. And honestly, I've read better modern AU Merlin fanfics than this.

However, if you are not overly familiar with the fandom and you don't have moral objections to pulled-to-publish fiction, this could be quite an enjoyable read for you if you like 'em light and quirky.