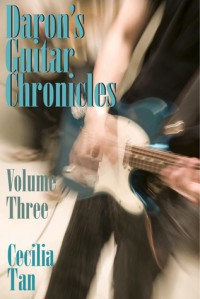 I am glad the author has decided to pick the story back up after this Volume 3 ends, because the end as it stands is okayish for Daron in the sense that he feels a little better about who and what he is, but damn, there is a bucketload of unresolved issues left to resolve.

Not the least of these is Ziggy.
I was disappointed by the development of Ziggy's character in this part of the story, especially after we got the one side story from his point of view. When he and Daron got involved, both of them were keeping each other at an emotional distance, neither of them willing or able to share what they felt, where they came from, what they wanted or expected. In keeping with the book, cue 'Communication Breakdown' by Led Zeppelin right here. http://www.youtube.com/watch?v=I3WwTLYNSec
Sure, Ziggy is uncommunicative and manipulative, but I get the feeling he is hiding a world of hurt himself and anxious to crack through the wall Daron has built, to be recognized as important to Daron. Daron, in his inability to give him this, both in public and in private, is as much at fault for their failure as Ziggy is.

But as the book progresses we see less and less of Ziggy, and what we see gets worse and worse, all of a sudden his character takes a nosedive. Now he is seen as a manipulative, vicious, vindictive asshole who throws temper tantrums and tortures Daron and Carynne on purpose. The hell? Does he need to be evil in order for Daron to work through his twisted feelings about him? I don't like to think so. Daron needs to pull his head out of his ass, stop obsessing about what Ziggy is doing to him and start thinking about what he is doing to Ziggy. Too much to ask of a 22 year old? God, I hope not.