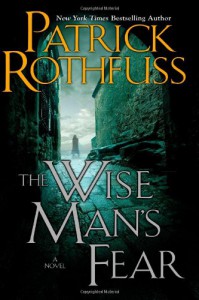 This is a middle book and so its nature is to be frustrating. We're past the introduction to this world and character, but none of the important questions get answered. We end up with more questions than we started with. The sheer number of questions that still need to be answered fills me with fear that Pat Rothfuss is not going to deliver answers to all of them. Who knows? Maybe Kvothe never finds out where the Amyr are. It's entirely possible. Pat sure doesn't seem to have a problem with anti-climactic explanations of facets of Kvothe's life that have been blown up in stories. Yes, Kvothe is good, but he doesn't miraculously beat the Adem at their own fighting style, Devi's
Alar is stronger than his, and like any other 16 year old, he makes plenty of stupid decisions with verve and vigor and total conviction. The boy is no Richard Rahl (thank god).

The experienced fantasy readers will catch themselves a few times when Rothfuss fails to deliver on a standard fantasy trope and gives us something more mundane, but ultimately more satisfying and insightful. This is to be expected, because this is a story about the nature of stories, after all, but even knowing this the readers can still get tripped up by their expectations of how the story is supposed to go.

The only thing I felt myself missing was a sense of urgency, a drive to get things found out and accomplished or else. That would have made the book completely unputdownable. Of course, the way that is usually done is with some convenient prophesy, but that is such a standard trope, it would have been jarring in this story.

Rothfuss is a masterful storyteller. His prose is smooth, polished and by times it sings. The story flows, within the telling and in the interludes. The latter are livelier than in NotW. Now, if we could only have a few damned questions answered...
Tweet