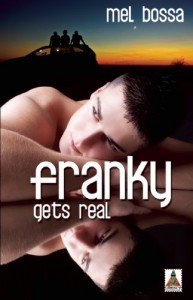 I have friends on goodreads that read m/m almost exclusively and love almost everything they read. Over and over, they fall in love with the current couple, the current story line, no matter how many of these books they've read. I envy them. I am one of those Scrooge type people. One of those overly analytical people. The more I read in a certain genre, the pickier I get. In my head are unofficial check lists of tropes and cliches and stereotypes and caricatures and I seem to develop new pet peeves every day. I have already worn out the m/f genre, fantasy and science fiction and sometimes I fear I am on my way to wear out m/m. I am not happy about this, by the way, and I am not blaming the authors. Well, maybe a select few. But I mostly blame my overactive left brain where the bitchy narrator lives.

This is kind of how the bitchy narrator was approaching this story: Yeah, yeah, Franky has a bitchy girlfriend, watch her be evil so he can just dump her, oh we're going camping with old friends, there's the jock, he is going to freak out about his brother being gay, oh there's the nerd, he's gonna be the peacemaker, oh look there's the fag hag for comic relief, she's gonna be annoying. Here come the lovable established gay couple to show Franky that his life isn't going to get bad necessarily if he turns gay. Oh, we all have little life crises going on in the group, now we're moving on into group therapy territory and we'll cry by the campfire and we're all going to have a catharsis and leave with friendships reaffirmed. Maybe one of the guys will get mauled by a bear and we can have a grand hospital scene!

So I am not saying none of that happened, some of it did, but far less than I expected. There were no easy fixes. No soul baring that magically cleared the air. No simply meeting the right penis for insta-solutions. And although I am sure the sheer amount of drama would be offputting for some readers, apart from a few minor eyerolls, I got completely sucked into the story. With so many characters it is not surprising that some remained a bit sketchier than others, but all had unexpected sides to them that deepened the story. Except for Vlad the Impaler, none of them were all 'good' either. Hell, I am not even sure I like Franky all that much. Dude has some serious issues. But I sure enjoyed reading about them.

The main reason this ended up with 4 stars instead of 5 is the abrupt ending. It's a HFN at best, and after all that time watching Franky fall apart, I really, really wanted to share some happy times with him. Not that it ends depressing, it just ends a bit.... open. Another chapter wouldn't have killed the author, and it would have left me flailing a tad less wildly. Because, after all, I am so used to getting everything wrapped up nicely with a bow on top in my m/m.

OK, so this not for the lovers of fluff and simple solutions. It is also not for those who rapidly overdose on drama. But well worth the read for everyone in between.

BTW: no sex. No, not fade to black, no sex at all apart from a little groping. But lots of juicy emotional stuff!
Tweet