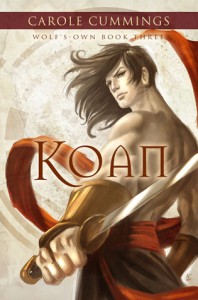 Everybody wants something from Fen. Everybody thinks they know what's best for him. And while they argue, Fen's grip on reality is slipping away.

And that is how we start a new story arc in the Wolf's Own series. You could have stopped after #2, but I think you'll be glad you didn't. This one starts a few weeks after the end of book #2, when Malick, Fen and their friends and family are settling into their new city of residence. Things aren't well in this city and some of it is tied up with Fen and Malick, and what wasn't tied up with them before, soon will be. That's just how Malick rolls.

If you've read previous books by Ms Cummings you know what to expect: a well crafted story, that is well written, with a few surprises, and where the internal development of the characters is as important as the actual plot. There is no black and white. People make mistakes, however well-meaning. The gods are fallible.

One of Ms. Cummings strengths (besides the world building that is detailed, but never preachy), is the depth of her characters. I feel like I would recognize each and every one of the main and secondary characters if I would meet them in the street. And her characters grow. I'm invested in them, all of them. Not just Fen and Malick.

The pacing in this book is slower than in book #2, much like it was in book #1: putting the chess pieces in place (no flashbacks in this one, though). If you can't handle stopping in the middle of a story, you should probably wait until book 4 is out before starting this one.