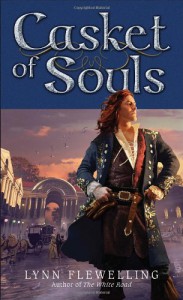 This is book 6 in the Nightrunner series so there are only two conceivable reasons for you to be reading this review. The first is that you LOVE everything EVER written by Lynn Flewelling and you want to know how AWESOME this book is. Or, you really liked the first two or three books in this series, but were kind of disappointed with the last two, and you don't know if that is because you are decade older now yourself or if it's the books. And you are hoping to find out whether you should even bother with this one or not. Of course, the people who hated this series aren't going to bother with book six at all. So you're either a fan, or, you used to be a fan, but now you're not sure.

Nightrunner is a bit of an oddball fantasy series to have produced six books. The first two are really one book. Book 3 is a standalone follow up with lots of political intrigue. Then there is about a decade of nothing. And then book 4 and 5 are again a team. And now book 6. A standalone again, unless I am really missing something. The series wasn't planned to have so many volumes, so there is no overarching plot line like in 'The Wheel of Time' where we're still waiting for the final battle after, what, 14 books now? I don't know, I quit at 9 or so. The standard 'group of fighters, thieves, elves and wizards need to save the world from evil overlord' was over and done with after book two. The main characters got together in those early books too. So now what? Probably some of the anticlimactic feelings surrounding the later books come from the fact that there's not much that can top saving the world and resolving the UST, now is there? Of course, if you have created a character like Seregil, it'd be hard to stop writing about him, I totally get that. Alec is great, sure, I happen to have a weakness for angsty teenagers, but it's Seregil that carries these books.

This is first book in which traveling isn't a major part of the plot. The guys stay in Rhiminee the entire book, although we do get some flashes to Beka at the front in Mycena. The plot here consists of mysteries and political intrigue, and the latter involves so many people it can be hard to keep them straight and remember who was trying to murder who again. The start is slow and it takes quite a while for some tension to build. But build it does and then it gets entertaining. There's not much I can say about the plot without spoilers, so that's all you get.

Story-wise, this book is most similar to Traitor's Moon and I enjoyed it about as much as that book. Which is to say, quite a lot, but not quite as much as the first two. The story is solid, the writing is good, and I enjoyed reading it. However, I found myself skimming some of the scenes that got repetitive, such as when the guys break into someone's house in search of evidence again, or go hunt down the ravens dressed as beggars again. Or the descriptions of food. And the main characters felt just a little – flat. Alec is not a teenager anymore and not as angsty and confused But he actually gets into an argument with Seregil at some point. Yay! That was long overdue. And maybe I have gotten too used to Seregil. Either that, or he has really lost some of his snark. Pity, that.

If Ms. Flewelling is going to write a book 7, I'll read it.


This book was provided by netgalley.com for the purpose of this review.
Tweet