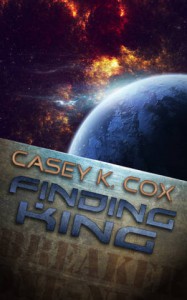 I’ve been looking for a long time for a good scifi m/m set in space. Lord knows the genre is full of bad ones, mostly because the scifi is just used as an added flavor to your standard romance. A thin veneer that anyone who has actually read a decent amount of science fiction tends to find unimaginative and boring. Either that, or it’s just an excuse to play out the sex slave trope with aliens. Who may or may not have tentacle dicks.

Despite the existence of sex slaves in this universe, this book isn’t like that at all. Instead of drooling over the male equivalent of Princess Leia in the gold bikini chained up in Jabba the Hutt’s lair, the story deals with one of the MCs recovering from a prolonged stint of such slavery. It has an amazing amount of worldbuilding shoved into its meager 21K words, and it’s done without any draggy infodumps. The universe depicted here feels solid and real. The MCs are solid too. The story is crammed with action (including Star Wars style rescues), the emotions run high and the sex delivers. It really is a satisfying blend of all these elements.

What is disappointing is that the secondary characters (and the villains) are a bit thin. This is where we run into the limitations of the novella format, there is just no room to develop all these people. They’ll be featured in future books, though, so I am sure they’ll get their due then. The plot is necessarily a bit thin (and predictable) too. A few more twists and turns would have been awesome.

The writing style is a bit choppy at times, with lots of sentence fragments, which is something you may have to get used to. It works really well when used to heighten the tension at important moments, at other moments it can feel a little odd. It didn’t particularly bother me, but a bit more variation in style would have been good. On the other hand, I really didn’t notice any editing issues at all, which is nothing short of miraculous these days.

All in all, a really decent scifi story and I will definitely read the sequels.